NAMI is a great resource for mental health needs. Their website alone has a wealth of information and the local NAMI's have groups and other resources to help people with mental illness. So if you are looking for resources or just information NAMI is a great place to look. Below is an article from their site about social anxiety. 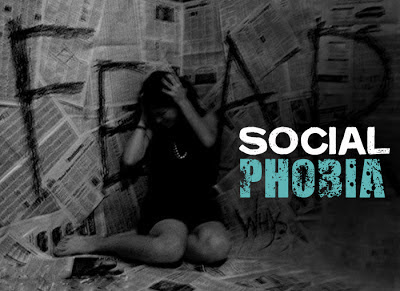 What is social phobia?

Social phobia is a strong fear of being judged by others and of being embarrassed. This fear can be so strong that it gets in the way of going to work or school or doing other everyday things.
Everyone has felt anxious or embarrassed at one time or another. For example, meeting new people or giving a public speech can make anyone nervous. But people with social phobia worry about these and other things for weeks before they happen.
People with social phobia are afraid of doing common things in front of other people. For example, they might be afraid to sign a check in front of a cashier at the grocery store, or they might be afraid to eat or drink in front of other people, or use a public restroom. Most people who have social phobia know that they shouldn't be as afraid as they are, but they can't control their fear. Sometimes, they end up staying away from places or events where they think they might have to do something that will embarrass them. For some people, social phobia is a problem only in certain situations, while others have symptoms in almost any social situation.
Social phobia usually starts during youth. A doctor can tell that a person has social phobia if the person has had symptoms for at least 6 months. Without treatment, social phobia can last for many years or a lifetime.

What are the signs and symptoms of social phobia?

People with social phobia tend to:

Social phobia sometimes runs in families, but no one knows for sure why some people have it, while others don't. Researchers have found that several parts of the brain are involved in fear and anxiety. By learning more about fear and anxiety in the brain, scientists may be able to create better treatments. Researchers are also looking for ways in which stress and environmental factors may play a role.

How is social phobia treated?

First, talk to your doctor about your symptoms. Your doctor should do an exam to make sure that another physical problem isn't causing the symptoms. The doctor may refer you to a mental health specialist.
Social phobia is generally treated with psychotherapy, medication, or both.
Psychotherapy. A type of psychotherapy called cognitive behavior therapy is especially useful for treating social phobia. It teaches a person different ways of thinking, behaving, and reacting to situations that help him or her feel less anxious and fearful. It can also help people learn and practice social skills.
Medication. Doctors also may prescribe medication to help treat social phobia. The most commonly prescribed medications for social phobia are anti-anxiety medications and antidepressants. Anti-anxiety medications are powerful and there are different types. Many types begin working right away, but they generally should not be taken for long periods.
Antidepressants are used to treat depression, but they are also helpful for social phobia. They are probably more commonly prescribed for social phobia than anti-anxiety medications. Antidepressants may take several weeks to start working. Some may cause side effects such as headache, nausea, or difficulty sleeping. These side effects are usually not a problem for most people, especially if the dose starts off low and is increased slowly over time. Talk to your doctor about any side effects you may have.
A type of antidepressant called monoamine oxidase inhibitors (MAOIs) are especially effective in treating social phobia. However, they are rarely used as a first line of treatment because when MAOIs are combined with certain foods or other medicines, dangerous side effects can occur.
It's important to know that although antidepressants can be safe and effective for many people, they may be risky for some, especially children, teens, and young adults. A "black box"—the most serious type of warning that a prescription drug can have—has been added to the labels of antidepressant medications. These labels warn people that antidepressants may cause some people to have suicidal thoughts or make suicide attempts.
Anyone taking antidepressants should be monitored closely, especially when they first start treatment with medications.
Another type of medication called beta-blockers can help control some of the physical symptoms of social phobia such as excessive sweating, shaking, or a racing heart. They are most commonly prescribed when the symptoms of social phobia occur in specific situations, such as "stage fright."
Some people do better with cognitive behavior therapy, while others do better with medication. Still others do best with a combination of the two. Talk with your doctor about the best treatment for you.

Katie Saint, PhD, LPC, BCBA-D
Katie Saint has her PhD in behavior analysis from the Chicago School of Professional Psychology and graduated from Lakeland College with a Master’s Degree in counseling. Katie obtained her behavior analytic degree from Florida Institute of Technology. Katie is dual certified as a Licensed Professional Counselor and a Licensed, Board Certified Behavior Analyst. She provides individual, and couple counseling to adolescents and adults. Katie has written college courses and speaks internationally on topics related to mental health and behavior analysis. Katie has published three books related to mental health and one assessment related to people's ability to live a fulfilling adult life. Katie has been published in several magazines. Katie utilizes a variety of therapeutic techniques including the combination of behavioral, acceptance and commitment therapy (ACT) and psychoanalytic tools. Katie works with relational problems, transitioning through divorce, working through ADHD, PTSD, anxiety and depression, grieving a loved one, and other life stressors. Katie focuses on helping clients recognize and build on their own strengths to meet their personal goals.